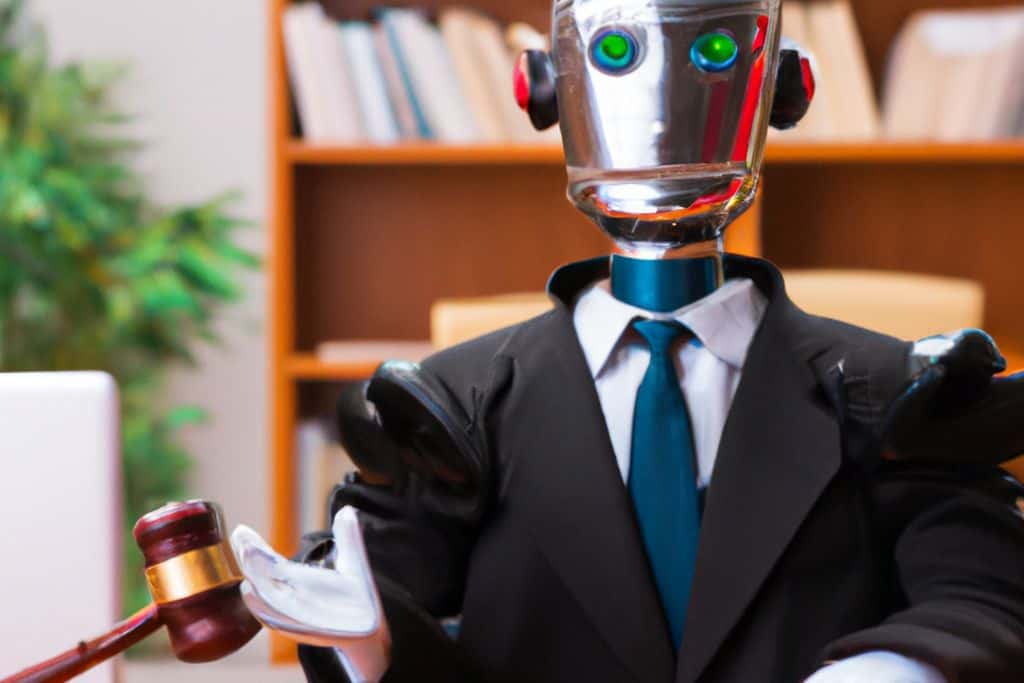 It’s been hard to avoid the news about ChatGPT from OpenAI these past several weeks – AI (or artificial intelligence) has taken the world by a storm, and in many contexts (particularly school or college), the quality of its output is apparently better than that of many students. And this is just the first public release – if history proves anything, it’s that ChatGPT, its successors and competitors, will improve by leaps and bounds with each iteration.

The more capable artificial intelligence becomes, the more it can potentially handle creative and other thinking jobs currently being performed by real people – robots replacing the intelligentsia! But can AI replace lawyers, that loftiest of professions?

According to this paper, the AI averaged a C+ on a series of law school exams, which included both essay and multiple-choice questions (Not that you would want to hire a C+ calibre lawyer!). And the ABA Journal last week had an article about ChatGPT passing two sections of the bar exam – Torts and Evidence, while still failing the bar exam overall. And that’s without even going to law school!

Just this month, an AI company called DoNotPay offered a million dollars to any lawyer willing to let its “robot lawyer” argue a case before the U.S. Supreme court by wearing an earbud and saying exactly what the AI told him/her to say.

While legal scholars quickly poured cold water on the idea as unworkable and unethical, it did at least garner attention for the company, which already offers AI services to assist people in beating traffic tickets. The same company had been planning on providing AI counsel to a real client to help beat a traffic ticket in court, but as Techdirt writes, abandoned that idea once the guild got involved (i.e. state bar).

So how would artificial intelligence do in a family law setting? I decided to check it out, and started with an easy one, asking it to “write a 500-word summary of the Colorado divorce process.” Note that it apparently generates unique content every time a question is asked, even an identical question, so if the reader replicates this, the result will be different.

I’ve highlighted a few portions of the ChatGPT output, which are discussed below.

The divorce process in Colorado begins with one spouse filing a petition for dissolution of marriage, also known as a divorce complaint. The other spouse, known as the respondent, must then be served with a copy of the complaint and given the opportunity to respond. If the respondent does not respond within a certain period of time, the court may grant a default judgment of divorce in favor of the petitioner.

Both parties are required to disclose financial information, including income, expenses, assets, and liabilities. This information is used to divide property and debt, and to determine whether alimony, also known as spousal maintenance, should be awarded.

In Colorado, property and debt acquired during the marriage is considered marital property and is subject to division. The state follows the principle of equitable distribution, which means that the court will divide the property and debt in a way that is fair, but not necessarily equal.

Child support is also determined in the divorce process. In Colorado, child support is calculated using a formula that takes into account the income of both parents and the number of children. The court may also consider additional factors, such as the child’s needs, the parents’ standard of living, and the child’s education.

It is important to note that there are also grounds for divorce in Colorado that don’t require a waiting period, such as incurable insanity.

In summary, the divorce process in Colorado begins with one spouse filing a petition for dissolution of marriage, followed by the disclosure of financial information, and the court determining the division of property and debt, child custody, and child support. The process can be completed relatively quickly, but it can also take much longer if the parties are unable to reach an agreement. The court’s main concern is the best interests of the child and the state follows the principle of equitable distribution. The court may also order the parties to participate in mediation or other forms of alternative dispute resolution in an attempt to reach a settlement.

How Did ChatGPT do with Basic Family Law?

Not bad – I was actually expecting worse. ChatGPT’s language is a bit basic and repetitive, and comes across as written by a high-schooler rather than a lawyer. And the ChatGPT output is not exactly hard-hitting legal analysis, though the question really did call for a superficial response, so I can’t really blame ChatGPT for that. And to be honest, this AI-written paper is better than some articles I’ve seen on web sites, which appear to have been ghost-written by people with no legal experience.

More concerning, however, are the errors it contains. While these may appear nit-picky to a non-lawyer, if AI gets this basic stuff wrong, it does not bode well for my using ChatGPT to write my legal briefs while I kick back on the beach. A few of the basic errors:

I would probably give ChatGPT a B- on this one. It’s a passing grade, and I’ve seen worse from lawyers who dabble in family law, but an experienced family law practitioner would do better, without the errors. Artificial intelligence undeniably has potential, and what we see from ChatGPT or its successors a few years from now will no doubt be much more advanced. And, hopefully, more accurate.

I was planning on trying a separate experiment by asking ChatGPT a more specialized family law question, and write up a different post analyzing the result. But I did a preliminary check by asking for a summary of how Colorado divides a military retirement in a divorce, and ChatGPT’s response was so unusably bad that there was no point in dedicating a blog post to picking it apart. It’s a good tool, but clearly not intended for specialized dissolution of marriage queries.

In the meantime, you can be rest assured that every post you see on our web sites is handwritten by lawyers from our firm, usually yours truly – we do not employ AI to help, nor put our names on fluff which was ghost-written by a third party with limited knowledge of family law.

Addendum – ChatGPT Not Intended to be a Lawyer

One of my college friends (who happens to be an engineer, so has forgotten more about AI than I will ever know) said it was “unfair” to compare ChatGPT to a lawyer, since an AI is only as good as the data it was trained on (a variation of “garbage in, garbage out”). And thus far, ChatGPT has a broad, general “education”, not specialized legal training. As a generalist, ChatGPT cannot be expected to answer questions requiring specialized education. He also pointed out that medical AIs with such specialized training are better at diagnosing patients than most physicians, the implication being that an AI which has been trained on the body of law can it be reasonably tested with legal tasks and give lawyers a run for our money.

That’s a fair comment, but it is reading too much into this post. ChatGPT, the tool which has received all of the publicity and is the only artificial intelligence bot generally available to the public, cannot (yet) perform a simple legal task to the standard of a lawyer. Once they have a specialized legal AI, I will certainly give it a try. And once such a legal AI can write articles which meet my standards, I may even give it simple, real-world tasks to see if it’s up to scratch.

For the time being, AI is an interesting diversion, but not a serious legal tool, but as I say at the beginning of this post, we’re only in the infancy of this type of AI, and I have no doubt in the future they will be able to perform tasks which currently only lawyers are able to do.

I am a family law attorney, and admittedly have very little artistic expertise. AI-generated art has been causing controversy in the art world, with the prospect that human artists are displaced as AI art is “good enough”, even if not the masterpiece a real person may throw his or her heart and soul into.

Instead of our normal images from Shutterstock, for this post I asked ChatGPT’s sister AI application, DALL*E 2, to generate legal artwork to accompany the article. This was much more hit & miss – after several tries seeking images which included courtrooms, divorce, and/or robots, I finally settled on two of them – one of them is the feature image above, of a robot judge, and the other is this one of a generic couple in a courtroom.

Being charitable, I would say this image is mediocre – and it was the best of the lot of all the images involving couples in a courtroom. I’ll experiment around with AI art a bit more, but for the time being, it’s not a threat to stock artwork. The biggest problem I’m running into right now is a seemingly basic one – the images are a fixed 1024×1024 square resolution, so not only are they relatively low resolution, but our site uses 3×2 images, and not all of the AI images can be cropped satisfactorily.