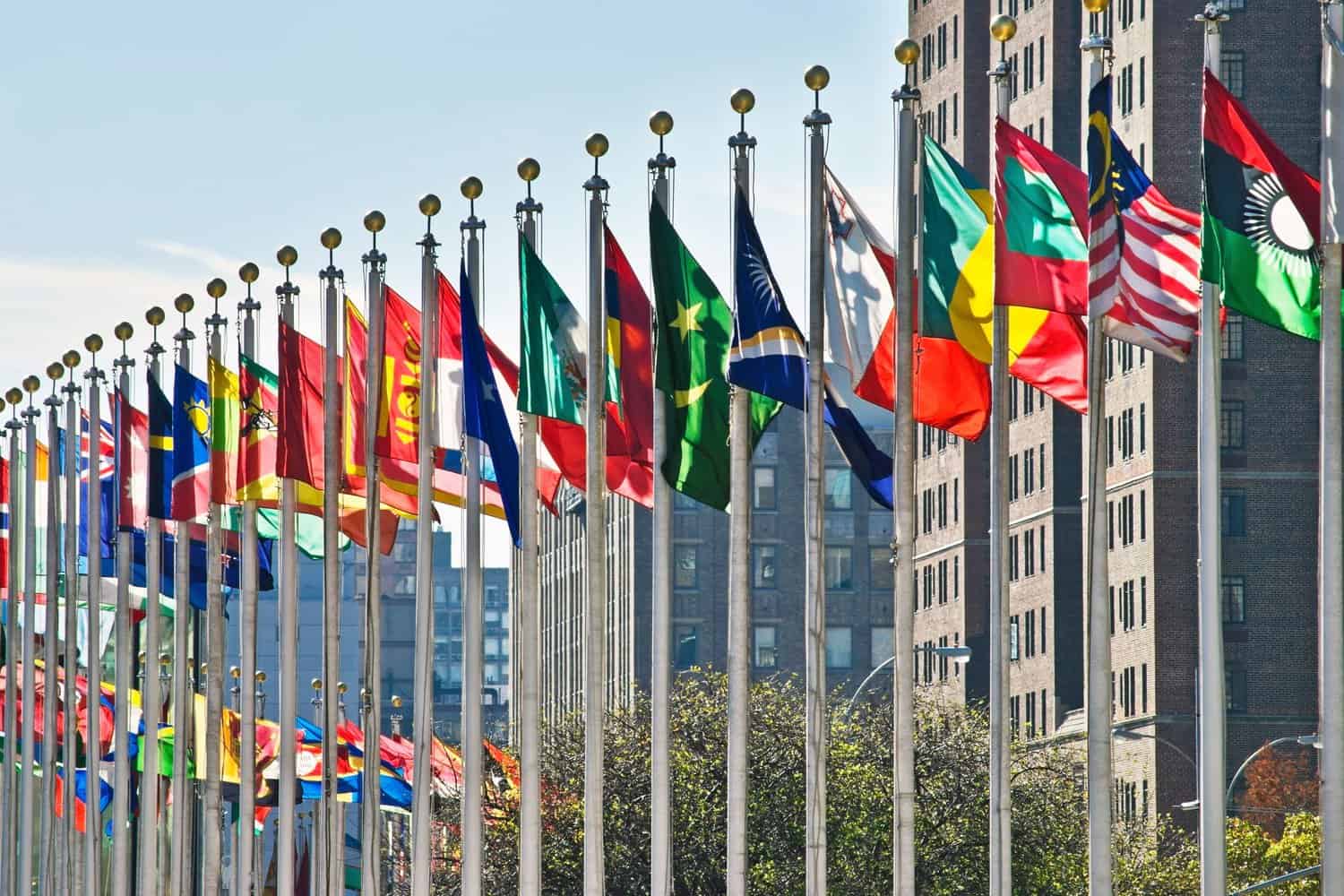 Family law decisions at the U.S. Supreme Court are rare, since domestic relations law is almost entirely governed by state law, not federal law. But there are enough areas of federal interest (military retirement, Hague Convention international child custody issues, and ICWA, or the Indian Child Welfare Act) that we can typically count on the U.S. Supreme Court to issue a decision pertaining to international child custody every couple of years or so.

The last SCOTUS decision on international child custody was Monasky7Monasky v Taglieri, 589 U.S. ___ , 140 S.Ct. 719 (2020). in 2020 (see our blog post International Child Custody Dispute at U.S. Supreme Court for a discussion of that case, and of the Hague Convention), so it was time for another decision from that august body.

In Golan,8Golan v Saada, 596 U.S. _____ (2022). the issue was whether the Hague Convention on the Civil Aspects of International Child Abduction required a district court to consider all possible ameliorative measures after finding a grave risk of harm to the child if returned to his country of habitual residence.

Quoting from Monaksy, the Court noted that the “core premise” behind the Hague Convention’s requirement that a child wrongfully removed from his country of “habitual residence” be promptly returned is that:

“The interests of the children in matters relating to their custody are best served when custody decisions are made in the child’s country of habitual residence.”

Hague Convention Exception for Grave Risk of Harm to Child

But like so many rules, there are exceptions. And in this case, the relevant exception is addressed in Article 13(b) of the Hague Convention, which provides that return is not required if

“There is a grave risk that his or her return would expose the child to physical or psychological harm or otherwise place the child in an intolerable situation.”

Congress implemented the Hague Convention in the International Child Abduction Remedies Act (ICARA), codified at 22 U. S. Code Chapter 97. That statute makes clear the court’s limited authority under the convention to follow the terms of the Hague Convention, and not to determine child custody on the merits:

Under ICARA procedures, once the party seeking the child’s return to his country of habitual residence has established, by a preponderance of the evidence that the child was wrongfully removed, the other party has the burden of establishing that an exception to the return requirement applies.

The “grave risk” exception requires clear and convincing evidence, 22 U.S. Code §9003(e)(2), which is a much tougher burden of proof to meet than the other party’s preponderance burden.

While the trial court necessarily considers whether protective measures (“ameliorative measures”) would protect the child as part of its “grave risk” analysis, once a grave risk is found, the Supreme Court held that the Hague Convention does not require the court to consider every such measure, summarizing its holding as:

Keep reading for a discussion of the facts of the Golan case, as well as a more detailed analysis of the Court’s Hague Convention ruling.

The Supreme Court’s summary of the pertinent facts are:

The trial court found that Italy was the child’s country of habitual residence for Hague Convention purposes, but also found that returning the child to Italy would expose him to a grave risk of harm, describing some of the violent incidents the child had witnessed as “chilling.”

“While B.A.S. was not the target of violence, undisputed expert testimony established that domestic violence disrupts a child’s cognitive and social-emotional development, and affects the structure and organization of the child’s brain.

Even the Italian social services agreed, concluding that the family situation posed a “developmental danger” to the child. Even the abusive father’s own expert witness testified that the father could not control his anger or take responsibility for his behavior.

Despite these damning findings, the trial court ordered the child’s return to Italy, based upon Second Circuit’s Hague Convention precedent requiring return “if at all possible,” and finding that the father’s proposed protective measures (including providing financial support and having no contact with the mother or child until the Italian courts had determined the child custody issue) would ameliorate the grave risk to the child.

The mother appealed the district court’s order to return the child, and the Second Circuit reversed, finding that the measures were insufficient to mitigate the risk of harm to the child, and there was ample reason to doubt that the father would even comply with them. But that was not the end of it – the court of appeals remanded to the trial court to consider whether there were any alternative measures which may provide sufficient guarantees for the child’s safety.

Over the next several months, the parties petitioned the Italian court for a protective order, and arranged for supervised visits between the father and child. The district court concluded these additional measures were sufficient, so again ordered the child’s return to Italy. This time the Second Circuit affirmed.

The Supreme Court granted cert to consider whether, once a court makes a grave-risk finding under the Hague Convention, it was error to require the court to consider all possible ameliorative measures to mitigate the grave risk.

Ameliorative Measures vs Grave Risk of Harm to Child

The Court addressed the role of ameliorative measures after a grave-risk finding:

Moreover, the Second Circuit effectively created an impermissible presumption in favor of return, even at the expense of the child:

“The Convention does not pursue return exclusively or at all costs. Rather, the Convention is designed to protect the interests of children and their parents.”

The Court set up three factors for district courts to apply when considering grave risk vs ameliorative measures under the Hague Convention:

“Any consideration of ameliorative measures must prioritize the child’s physical and psychological safety. The Convention explicitly recognizes that the child’s interest in avoiding physical or psychological harm, in addition to other interests, may overcome the return remedy. A court may therefore decline to consider imposing ameliorative measures where it is clear that they would not work because the risk is so grave. Sexual abuse of a child is one example of an intolerable situation. Other physical or psychological abuse, serious neglect, and domestic violence in the home may also constitute an obvious grave risk to the child’s safety that could not readily be ameliorated. A court may also decline to consider imposing ameliorative measures where it reasonably expects they will not be followed.”

No Adjudication of Child Custody Under Hague Convention

“consideration of ameliorative measures should abide by the Convention’s requirement that courts addressing return petitions do not usurp the role of the court that will adjudicate the underlying custody dispute. The Convention and ICARA prohibit courts from resolving any underlying custody dispute in adjudicating a return petition. Accordingly, a court ordering ameliorative measures in making a return determination should limit those measures in time and scope to conditions that would permit safe return, without purporting to decide subsequent custody matters or weighing in on permanent arrangements.”

Must Act Expeditiously Under Hague Convention

“any consideration of ameliorative measures must accord with the Convention’s requirement that courts ‘act expeditiously in proceedings for the return of children.’ Timely resolution of return petitions is important in part because return is a “provisional” remedy to enable final custody determinations to proceed. The Convention also prioritizes expeditious determinations as being in the best interests of the child because expedition will help minimize the extent to which uncertainty adds to the challenges confronting both parents and child. A requirement to examine the full range of options that might make possible the safe return of a child, is in tension with this focus on expeditious resolution.”

The Supreme Court noted that on remand, the trial court took nine months to address ameliorative measures, which is in contrast with an implicit expectation within the Hague Convention that proceedings should take no longer than six weeks.

While the mother asked the Supreme Court to reverse the lower court decisions, and keep the child in the U.S., the Court declined to do that, instead remanding the matter back to the district court to make its required discretionary findings, now with clear SCOTUS guidance that it is not mandated to consider every possible ameliorative measure:

“Under the circumstances of this case, this Court concludes that remand is appropriate. The Convention requires courts to make a discretionary determination as to whether to order return after making a finding of grave risk. The District Court made a finding of grave risk, but never had the opportunity to engage in the discretionary inquiry as to whether to order or deny return under the correct legal standard. This Court cannot know whether the District Court would have exercised its discretion to order B. A. S.’ return absent the Second Circuit’s rule, which improperly weighted the scales in favor of return.”

So a victory for the mother on the law, but not necessarily the facts, as the parties face more delay as the district court now considers again whether ameliorative measures can address the grave risk of harm – but this time using its discretion to accept or reject reasonable measures, rather than being mandated to consider every potential measure. So this is not a substantive victory for the mother, but a procedural victory under the Hague Convention which may make a substantive victory easier to attain.

et the father (Saada), an Italian citizen, in Italy.